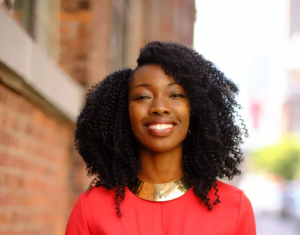 The Sadie Collective was officially founded in August 2018 in Washington, D.C., by Anna Gifty Opoku-Agyeman and Fanta Traore. The mission of the organization is to empower and equip Black women in quantitative sciences. If you don’t know yet about this organization, we encourage our readers to check out their website for more information about the organization’s history and activities.
In this interview, I speak with Fanta Traore, one of the co-founders of the Sadie Collective. This interview was done on October 27, 2020.

Sebastian: Thanks for agreeing to this interview. There is information on the website about this, but could you give our audience a sense of membership benefits in the Sadie Collective?

Fanta: The Sadie Collective is the first and only organization explicitly focused on Black women’s inclusion in economics, data science, finance, and public policy. Our community offers a space where you don’t have to be “the only one” anymore. If you’re a Black woman in the field, you now have this community of people who have shared experiences while serving as a resource for you. This means helping you navigate the space, thinking about job prospects and your own career trajectory.

There are different ways to engage with the Collective. For example, the career fair is an opportunity for you to connect with a plethora of various organizations under the fields we target. This has already led many women to obtain job offers in roles they may not have previously considered.

This is because of increased awareness about what opportunities exist in economics. This is important because it is not always clear -especially for those who are earlier in the pipeline – this idea of “What does an economist do? “which is different from other careers. For example, when it comes to accounting, “you become an accountant.” Studying economics leads to a variety of career options. We help you bridge that information gap by connecting you with practitioners, mentors, recruiters, other important people in your field and skills building workshops

Sebastian: Great. So it seems that there are three big categories of benefits: (1) information and skills building, (2) networking opportunities, and (3) developing a community of Black women and allies… Are there some misconceptions of the organization that you would like to address?

Fanta: I think this is a good point for me to define what is meant by the Collective. The Collective is a community of people who are invested in this mission. You don’t have to be a Black woman to be a part of the Collective. The misconception is that you do have to be. For there to be a shift in the diversity in the field, we will need to have everyone be engaged with the goal. We have to realize that less than 1% of PhDs graduating on an annual basis are Black women and men, and the numbers of Latinx and Native American women are also quite similar. So, then, the shift in the economics profession will not happen just because of Black women and people of color. Allies, and those throughout the profession are critical to its shift. To join our allies community: www.sadiecollective.org/join. We provide resources and insights on how to support Black women in the field.

Sebastian: Is this organization mainly for pre-docs and doctoral students? Is there a role for faculty? How could they be involved?

Fanta: Thank you for that question! It is a really great question. I say that because we’ve been doing a lot of thinking about our theory of change, we even have a whole slide deck that breaks the pipeline down and the different ways that we interact with each part of the pipeline. Within that, for example, we have started reaching out to high school students. This is new! We had some high school students at the 2020 conference and see this unique opportunity during the pandemic to bring even more into the fold. The organization mainly targets undergraduate students and pre-doctoral students, but we’re branching into the high school space, because we are uniquely positioned to increase the number of Black women and underrepresented minority women into economics majors.

Sebastian: That sounds great. A quick follow-up if you want to become a member, you can go to www.sadiecollective.org/join

Fanta: Yes, and that will add you to our mailing list, and as opportunities roll out, we’re able to share them with you. This also helps us in other ways. For example, we just had a few people on our “allies lists” to be invited to serve as mentors for our research scholars. This mentorship relationship is another way that faculty can get involved.

Fanta: We’ve done so much! and it’s only been two years! Let’s see, I think having Chair Janet Yellen at our conference is definitely a highlight and having her engagement and Governor Brainard from the beginning has been amazing. On a personal front, I had the chance to meet governor Brainard and the Chair on several occasions. That has been great. A funny anecdote: in our first meeting together, I had just joined the bank. I was starting to organize the conference, and at that time, I saw myself as an RA who is just like -you know- trying to do good work and get into a good econ affiliated program. When I was in that meeting, I didn’t realize that she was looking for me to lead it. That really made a difference in how I felt. By subsequent meetings, I was much more confident and taking ownership of my unique value and contribution to the economics field, outside of my role as a coder and junior economist.

I’m also proud of the connection that we had with Dr. Alexander’s daughter. That’s definitely number one. She learned about the Sadie Collective, and she has blessed it. I was very nervous about using her mother’s name to lead the organization, though trying everything we could to get in touch with her. Once we did, she has been such a great supporter, and she has shared with us that she always saw her mother as a lawyer and not an economist because she never got to practice economics. So, this is really cementing her legacy of what a dynamic woman her mother was. She was a connection made through Dr. Julianne Malveaux, who has done work on Sadie Alexander. This work continues by Dr. Nina Banks.

Finally, the open letter for economic institutions got a lot of traction, and I think that the Sadie Collective has really shown up and met the moment around the pandemic. We could have decided not to engage, but we did. I think it really elevated this conversation around why “Black Women Best,” a term coined by Janelle Jones, from the Groundwork Collaborative (and now Chief Economist at the Department of Labor), should be centered. Basically, if the economy is working for Black women, it will work for everyone.

Sebastian: As the organization grows, there are probably new goals and roles that emerge. Can you share some new things you are thinking about that the Sadie collective will do?

Fanta: Yes, some new things we are working on are getting more involved with high school students. We had a student come to our conference thinking she was interested in engineering, but then she saw how you can use these quantitative skills to make an impact through economics. Now she’s studying economics at Washington University St. Louis, and she is doing some research around diversity in economics for one of her classes. Seeing that shows me that there’s so much potential for transforming the space.

We are also looking forward to partnering with organizations like the “Research in Color Foundation” and “Black Girl in Boardrooms,” which is about getting Black women to the C-suite.

Sebastian: As founders, what are things that you’ve learned through the process of working on this organization?

Fanta: There’s so much learning. It’s a very humbling process. Because to lead is to serve, and in that, you have to constantly be thinking about what are the needs, how can I meet them, and how do I do that in most impactful way, while considering the constraints of your time. This has been particularly hard to grapple with: being graduate students, being full-time employees, being pre-doctoral students, being in Ph.D. programs, etc. But in that, we have learned to be adaptable and to seize the moment. We have learned the power of networks, and #EconTwitter has been incredible.

We have learned how to be true to our leadership style, which is the Collective element, and recognizing the power of community. There’s this African proverb that goes, “If you want to go far, go alone. If you want to go further, go together,” and that’s what we’re doing.

Sebastian: Thank you so much for your time and your work. People can find out more about the organization at https://www.sadiecollective.org