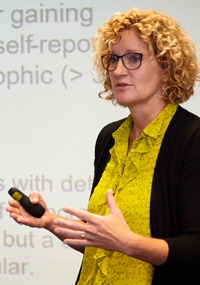 One of the benefits of attending a conference in person is that the side conversations can spark new ideas and initiatives.  This is what happened when Kosali Simon, Tony LoSasso and I ended up at a conference together at the Federal Reserve Bank of Chicago in 2014. Tony had recently been appointed the Executive Director of the American Society of Health Economists (ASHEcon) and we were discussing the upcoming conference to be held at the University of Southern California. One of the topics that came up was that the job market for health economists is so different than other fields and that it would be nice to offer some form of mentoring to the students on the job market, similar to what CSWEP provides for the career development of female economists. Tony asked Kosali and I,  if we would be willing to work on this and we gladly agreed to put something together for the Fifth Biennial Conference to be held in June, which was only 3-4 months away.

We did not have a big budget, nor did we have a lot of space in the program, so a breakfast was the only available option. Since we only had a few hours, we did not feel it was enough time to develop a strong mentoring relationship, so we went in the opposite direction of speed mentoring. Each mentee saw four different mentors for 25 minutes at a time, along with two other graduate students. So, each student encountered four different mentors and each mentor met 12 different graduate students. The goal was to recruit high profile senior economists to meet with the students and provide feedback on the hiring process and gain practice discussing their dissertation. In the process, the students got to meet journal editors, ASHEcon board members, and other senior influential economists. They were also encouraged to find the mentors during the rest of the conference and follow up with any questions. It was so well received, largely because we got such buy-in from senior economists, that we continued to hold these breakfasts at our annual meetings until COVID-19 unfortunately disrupted our in-person meeting last year. Along the way, we also added in a separate session for early-career economists; that event is geared more for networking and broad career advice as well as to get feedback on the tenure process and their career development.

As I am not a professor, this was very much a way for me to give back to the profession and to work with students again. It is hands down one of the best things I have ever worked one and I benefited by meeting future economists (in fact, one of the mentees from the first mentoring breakfast, Sebastian Tello-Trillo, is now the editor of this newsletter and one of my co-authors), but I also got to know more of my fellow economists.  One of the best things about this program was seeing their enthusiasm to be mentors. Almost everyone we asked to mentor did so and the mentees appeared to have benefited greatly from their time. Not everyone was as lucky as me to gain a co-author, but hopefully everyone felt welcomed by the field and more comfortable walking into sessions.

This past year because of the virtual conference, things were done a bit differently and I was matched with two health economists for private, virtual meetings. While the excitement of the event itself was missing, spending an hour meeting with these students was equally fulfilling. I have corresponded with both of them and hope to touch base periodically and follow their career. While I do not know what form mentoring will take in the future for ASHEcon, I feel certain that it will continue and strongly encourage everyone to participate and to encourage your students to do so as well