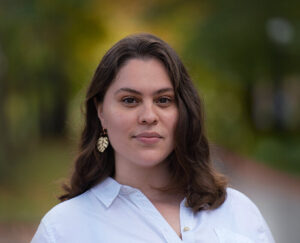 This year, we feature an interview with the winners of the 2021 Student Paper Award: Emily Cuddy and Jonathan Holmes. You can find more about the other awardees on this site. The following is an interview with Emily Cuddy. Emily is currently a postdoctoral fellow at the Kellogg School of Management at Northwestern University. She finished her Ph.D. in Economics at Princeton this past spring and plans to join the Department of Economics at Duke University after her postdoctoral fellowship.

Thank you for being here with us today. Can you tell us a bit about your overall area of work?

Thank you for having me! Broadly speaking, I am interested in the functioning of health care markets and how they impact people. So far, my work has focused on different aspects of pharmaceutical markets in the US, from how manufacturer competition affects upstream drug prices to how physicians’ use of certain psychiatric drugs affects the health of adolescents with mental illness.

That sounds great. Congratulations on your award! Tell us a bit about what the paper is about.

Thank you! My paper investigates what led to the incredible price increases in the US generic drug market over the past decade. There were two issues at hand: first, there was insufficient entry into these markets due to an application backlog at the FDA—manufacturers had to wait for years to receive approval to market their drugs—and, second, there was a collusive ring of generic manufacturers, some say the “largest corporate cartel in US history,” who were working together to divvy up the market to maintain supra-competitive prices.

Using both public and private data sources and insights I gained from interviewing several generic manufacturer executives, I design and estimate a structural model of the upstream market for each generic drug, which allows me to recover manufacturers’ costs. I then use these costs to run a series of counterfactual exercises, where I simulate what prices would have been in the absence of the cartel and the FDA’s backlog. My results suggest that while the FDA backlog did result in much higher prices, its effects on upstream prices paled compared to the damage from the collusive ring. I show that in a matter of 18 months, their activities resulted in pharmacies paying over $12 billion more for their drugs.

That’s very interesting. Can you talk a bit about the legality of this “cartel”? Is this something “known” in the circles and that no one can do much about it? Or is this collusion legal?

Well, I suppose that depends on who you ask! Both the US Justice Department and State Attorneys General believe that this scheme was illegal; the 26 accused pharmaceutical firms not so much. While the government’s lawsuits are still active in the court system, they include the modern-day smoking gun evidence of executives competing for generic firms communicating about prices and contracts in ways they should not have if they were following the law. This is one instance where the legal documents themselves are real page-turners.

How did the idea come about? When did you start working on it?

In the summer after my first year of graduate school, I worked as an RA for Janet Currie on a project involving market-level drug data. While incredibly detailed in many respects, it lacked detail on prices. In search of better drug price data, I became interested in how drug prices, particularly those of generic drugs, came about—that is, what determines how much a manufacturer charges for its product? My multi-year search to answer this big-picture question ultimately led to the specific question posed in the paper itself.

Will there be follow-ups to this paper, or has this paper made you think of new questions?

I hope so! I am interested in picking up where the current paper leaves off, which is the short-run effects of the price increases. Anecdotal evidence suggests that these price hikes led to significant structural changes throughout the generic market, from manufacturers choosing which product markets to enter to how downstream participants—think, retail pharmacies and health insurers—structure their contracts. Ironically, these longer-term, more indirect effects of what happened in the generic market in the early 2010s may have had more significant effects on US consumers.

What does this award mean to you?

Receiving this award is such an honor, especially to be able to do so in the company of so many health economists whom I have admired since I took my first health economics class as an undergraduate student. It is also very encouraging to see how positively people have responded to this project—I often worried that it was too “in the weeds” to interest others. Yet, it seems fortunate that I was mistaken!

Where are you heading next?

I am at the Kellogg School of Management at Northwestern University for a year of postdoctoral studies. Then I will head to Duke University, where I will be joining the Economics Department as an AP.