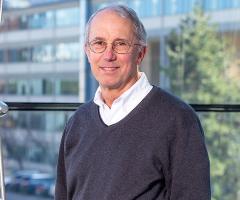 Thomas G. McGuire, PhD, is the recipient of the 2018 ASHEcon Victor R. Fuchs Award. The award is given to an economist who has made significant lifetime contributions to the field of health economics. Since 2001, McGuire has been a professor of health economics in the Department of Health Care Policy at Harvard Medical School. For 25 years prior, he worked in the Department of Economics at Boston University. He is a Research Associate at the National Bureau of Economic Research and a member of the National Academy of Medicine. He was a co-editor of the Handbook of Health Economics Volume 2, and served for ten years as an editor of the Journal of Health Economics. McGuire’s research focuses on the design and impact of health care payment systems, the economics of health care disparities, the pharmaceutical sector, and the economics of mental health policy. His awards for research include the Arrow Award from the International Health Economics Association. He received the Everett Mendelsohn Excellence in Mentoring Award from Harvard’s Graduate School of Arts and Sciences.

Jonathan Kolstand, PhD, is the recipient of the 2018 ASHEcon Medal. The award is given to an economist age 40 or under who has made the most significant contributions to the field of health economics.  Professor Kolstad is an Associate Professor of Economic Analysis and Policy at the Haas School of Business at University of California, Berkeley and a Research Associate at the National Bureau of Economic Research. Kolstad is an economist whose research interests lie at the intersection of health economics, industrial organization and public economics. He is particularly interested in finding new models and unique data that can account for the complexity of markets in health care, notably the role of information asymmetries and incentives.

Benjamin Handel, PhD, is the recipient of the 2018 ASHEcon Medal. The award is given to an to economist age 40 or under who has made the most significant contributions to the field of health economics.  Benjamin Handel is an Associate Professor of Economics at the University of California, Berkeley, where he has taught since 2010. He received his A.B. from Princeton and his Ph.D. from Northwestern. He was named a National Bureau of Economic Research faculty research fellow in industrial organization in 2011 and became a research associate in 2016, when he also became Co-Director of the NBER working group on insurance markets. He is an expert on health care business and policy and has worked with numerous businesses and policymakers in partnerships to research key topics in health care economics. Handel’s work is primarily concerned with the economic analysis of health insurance markets.

Pat Bajari, PhD, is  is the recipient of the 2018 Willard Manning Memorial Award.   Pat is an applied econometrician currently working as Chief Economist and Vice President for Amazon in Seattle, WA. His team of PhD economists, software development/data engineers, and machine learning/data scientists use applied econometrics and scientific practices to help Amazon better serve their customers and operate more efficiently. They have collaborated with other Amazonians to develop technically advanced but practical solutions in operations, pricing, forecasting, applied marketing and merchant services that currently power their platform.

Prior to working at Amazon, he was a full time academic working in applied econometrics and empirical industrial organization. He is a Research Fellow at the National Bureau of Economic Research and has served as a journal editor and thesis advisor. While in academia, he consulted to the Boston Consulting Group, the Federal Reserve System, the Law and Economics Consulting Group, the US Federal Trade Commission and served as an expert witness in antitrust and litigation.

Han Hong is the recipient of the 2018 Willard Manning Memorial Award. Han has been a Professor of Economics at Stanford University since 2007. His research interests focus on econometrics, industrial organization, and applied microeconomic analysis. He has published in top economics and econometrics journals on a wide range of research topics. In 2009 he was elected to be a member of the Econometric Society, an internationally recognized organization for economists and econometricians.  The Econometric Society has about 700 fellows worldwide in 2014. New members are elected each year through an anonymous voting process.  Professor Hong has also visited and taught in the University of Chicago, Beijing University, Renmin University, Zhongshan University, HongKong University of Science and Technology, and the Catholic Universite de Louvain in Belgium.  He is currently a co-editor of the Journal of Econometrics, a flagship journal for econometrics research.

Minjung Park, PhD,  is the recipient of the 2018 Willard Manning Memorial Award. Minjung is an empirical microeconomist with specialties in empirical industrial organization, microeconometrics and marketing. Her main research interest lies in firm behavior in a competitive marketplace and various strategies used by firms to attain the competitive edge. In her work, she employs structural models to analyze how firms respond to institutional and market incentives and how the strategic interactions influence market structure and consumer welfare. She is also interested in identification and estimation of time preferences in dynamic discrete choice models. She is currently an associate professor in the Department of Economics at Ewha Womans University in South Korea.

Robert Town, PhD, is the recipient of the 2018 Willard Manning Memorial Award. Robert  is an authority on competition economics with a focus on healthcare markets, mergers analysis, and the airline industry. His areas of expertise include health economics, industrial organization, and applied econometrics, with particular emphasis on mergers, hospital structure and efficiency, health insurance, and physician incentives. In his research, Professor Town studies provider and insurer competition, the role of competition in determining hospital quality, and healthcare market dynamics. In addition to articles in the Journal of Health Economics, Econometrica, American Economic Review, Health Affairs, and the Antitrust Bulletin, he has cowritten book chapters about healthcare provider competition and deregulated airlines. Professor Town is an associate editor at the American Economic Journal: Applied Economics. He’s currently a professor at the University of Texas, Austin.

Emily Lawler, PhD,  is the recipient of the 2018 Student Paper Award. The award is given to the best student sole-authored paper. Emily Lawler is a health economist whose research focuses on the effects of public policies on maternal and child health, both in the United States and the developing world. Her current work studies the effects of vaccination policies on health and health behaviors. In the fall she will join the University of Georgia’s School of Public and International Affairs as an Assistant Professor.