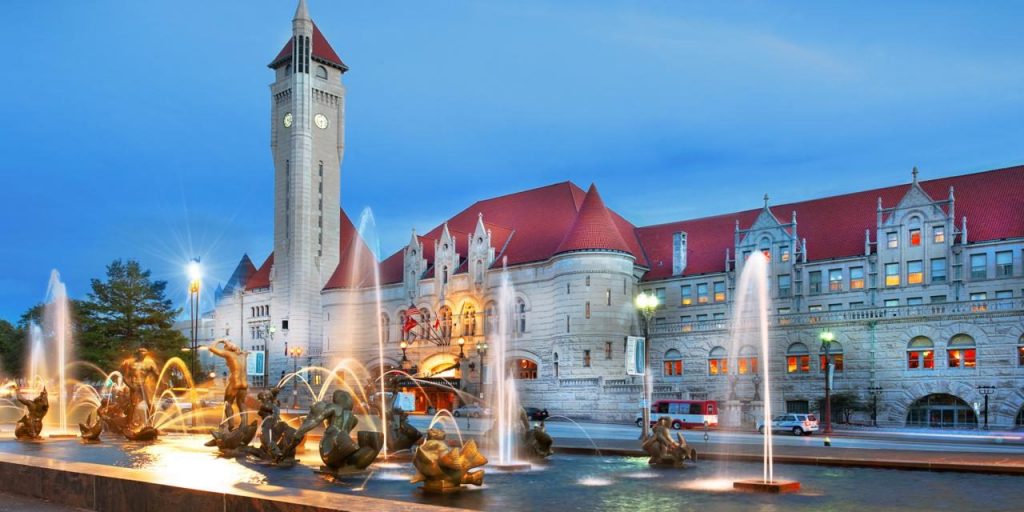 All conference events will be held at the St. Louis Union Station Hotel a former train station that is now a National Historic Landmark. The first train pulled into Union Station on September 1, 1894 at 1:45pm, ushering in a new and exciting time for St. Louis. The city known for being the gateway to the West suddenly became a gateway to all of America. Over the next several years, Union Station would become one of the largest and busiest passenger rail terminals in the world.

The station saw some of its highest traffic during the World’s Fair of 1904 and World War II. Travelers moved in droves through the station, where a regular day’s capacity of more than 100,000 people was normal, and the midway became the most popular spot to see and be seen. People like President Harry Truman, Joe DiMaggio, Joan Crawford and St. Louis baseball teams the Browns and the Cardinals all made appearances at Union Station.

Today, Union Station is a balance of nostalgia and renovation. The stylish and sophisticated Grand Hall features elegant historic touches like the original terrazzo floor, green glazed terracotta bricks, stained glass windows and wooden carpentry detailing. Anchoring the entire Union Station development will be the stunning St. Louis Aquarium. Visitors will also get a bird’s-eye view of the train shed and the iconic St. Louis skyline when they board the neighboring 200-foot St. Louis Wheel.

The St. Louis Union Station Hotel is located close to major attractions. From the first glimpse of the iconic Gateway Arch to the offbeat gems that thrive in its 79 unique neighborhoods, St. Louis has fully emerged from its shell. It has unveiled itself as a global culinary hotspot. With 170 parks, dozens of golf courses, hundreds of miles of greenway trails, plus an overwhelmiong number of performing arts venues, museums and breweries there are plenty of memorable moments to be made all over the city.

The St. Louis Lambert International Airport is about a 25-30 minute drive to the hotel. If you drive, valet parking is highly recommended and available at the Main Grand Hall entrance on East-bound Market Street. If you chose to Self Park please do so behind Maggies O’Briens next to the hotel on 20th street. There is a light rail service, MetroLink, from the airport to the Union Station which is a half a block from the hotel. The cost is $4.50. For additional information and directions, visit the hotel website.